Contact us
Support us
Show menu
If you plan to visit tourist attractions in Slovakia, we recommend that you follow the information of operators and state institutions on the current situation and please follow their recommendations and regulations. Due to the current situation, public events are canceled and tourist attractions may be closed. It is prohibited to organize sport, cultural and public events on the whole territory of the Slovak republic.On the whole territory of the Slovak republic must be closed bars, clubs, entertainment centers and facilities, ski resorts, wellness centers, spas, aqua parks, fitness centers, children's play areas and social and cultural facilities.

Guitar Museum in Sobrance in Slovakia is a unique exhibition - one of the few of its kind in the world. The "Guitar king" Janči Ferko from Sobrance in Slovakia has done something exceptional. In small town Sobrance he built a Guitar Museum that maps the complete development and production of electrophonic guitars in former Czechoslovakia after the Second World War. Today, there are 1200 exhibits in the museum. There are 200 guitars, keyboards, amplifiers and period exhibits, accessed for vistors at present time in the gallery.

In continually expanding gallery of music instruments belongs to the most valuable exhibits electrophonic contrabasses, hawai guitars and guitars Grazioso, awarded by gold medal at the EXPO 58 in Brussel. Grazioso guitars were provably used by famous musicians of the world music scene The Beatles, Led Zeppelin and Eric Clapton. Musem attracted interest of many well-known Slovak and Czech musicians and donated to Janči Ferko their own instruments (Peter Janda, Maťo Ďurinda, Peter Kaplan...).

Founder Janči Ferko received exclusive offer to establish a museum in Prague, Bratislava or Košice. His collection was also wanted by a Czech company producing guitars. "Janči", however, remained faithful to Sobrance. This small town can be proud by the invaluable uniqueness that attracts tourists and the media regularly.

Follower of the "Guitar King" - his son Imrich has long been co-operating on the project with father and continues the started activities, he himself is a former musician. After the completion of the entire project, the whole area will be a place of culture, a music center and a place of interesting concerts. A gallery of modern art will also be here. 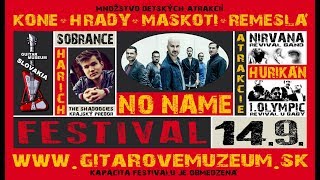 Beckov Castle
Beckov Castle is one of the most beautiful and most impressive national cultural monuments of Slovakia. The castle is situated on 60 meters high cliff above the village of Beckov, near the river Vah. Beckov Castle guarded the trade road throughout territory of  Považie since the 13th century. It was the castle of the kings, mighty magnates and knights, a castle that resisted both the Tatars ...
Natural Sciences Exposition - Šariš museum in Bardejov
Nature of the north-eastern Slovakia and its Conservation The display presents characteristic representatives of north-eastern Slovakia's flora, but particularly fauna (orographic units of Čergov, Ondavská vrchovina, Pieniny, Busov, and Ľubovnianska vrchovina). The display is divided ecologically into biotope units. The visitor can see exhibited animals and plants in an imitated ...
National Cultural Monument Kalište - Museum of SNP
Kalište is one of many villages and settlements that were burned during World War II. Life in Kalište, as in a only village, has not been restored until today. It is located in the protected area of the National Park Low Tatras (Národný park Nízke Tatry ) at 924 m. a.s.l.. There are reconstructed 2 houses, a small bell tower and the foundations of burnt houses. They recall the tragedy from ...
Andy Warhol Museum
Andy Warhol Museum of Modern Art is situated in city of  Medzilaborce in Slovakia.  Andy Warhol was born on 6th August 1928 in Pittsburgh to a family of Ruthenian immigrants issuing from the village of Miková close to Medzilaborce in the territory of present-day Slovakia. He had two elder brothers, Paul (b. 1922, d. 2014) and John (b. 1925, d. 2010). His father Andrej Varchola/Andrew Warhol ...