Crypt of soldiers from World War I. in Osadné

In short, from the history of the Orthodox Church and the Crypt in Osadné

The history of the crypt in Osadné is closely connected with the construction of Orthodox temple and with the circumstances related to revert of village inhabitants to the Orthodox Church in 1926. At its official founding (in 1543), the Ruthenian inhabitants of Telepovce (the name of Osadné until 1948) belonged to the Orthodox Church and even in 1612 there exist a written record about local orthodox clergyman. However, in 1726 the local clergyman Simeon Rusčanský signed the Union with Rome in Humenné, which was later incorrectly entitled as a Greek Catholic Church. After 200 years later (in 1926) all inhabitants of Osadné returned with their signatures in local register back to the religion of their ancestors – Orthodoxy like many other Ruthenian villages in the wider vicinity.

All the events previously mentioned led to a decision of the Orthodox believers to build their own temple in 1926.The Lenik family donated a portion of their land to the church. Their donation enabled a temple to be constructed. But they still did not receive a building permit, because the Orthodox Church in Osadné was not registered at that time. It was succeeded in 1929. Father Alexander was in agreement with the people for the necessity of providing a proper funeral for all the fallen Russian soldiers. The graves for those soldiers were scattered all around the land. The people wanted to pay respect to the dead. As a result, the people decided to build a crypt under the temple, where it would be possible to pray for them.

Significant was the help of the government and Czechoslovak President T. G. Masaryk and the organization Jednota (Brotherhood), which carried out the financial collection. Not only did Masaryk provide the necessary approval for the temple’s construction, he supported it financially. Construction of the crypt began in 1929. Archimandrit Andrej Kolomacký was the project’s architect.

An attempt to bury soldiers in one place, however, was already in 1920, but not all of the tombs were transported to the cemetery.According to military records, 1025 soldiers were exhumed placed into the crypt in years 1933 - 1934. Corpses of 1467 Austro-Hungarian soldiers from the cementaries in Osadné, Nižná and Vyšná Jablonka were stored in two enclosures on the grounds of the current cemetery near the Uniatic temple.

The crypt has been forgotten for over 60 years

As the years passed, people forgot about the crypt. The floor was of concrete construction and used as a warehouse. Conservation organizations and tourists demonstrated a growing interest in the crypt. In cooperation with the Association of Friends of Eastern Carpathia, priest Mikuláš Petrovka managed to open a part of the crypt for public. As a result, tourists could enter the crypt and examine its contents. Priest Mikuláš Petrovka secured funds for a new door to the crypt.

Unfortunately, moisture was destroying the crypt and posibility existed that the ceiling would collapse. In 2002 priest Peter Soroka was appointed to Osadné and started contacting various institutions regarding the crypt. Either no response from elicited from those contacted or there was outright rejection. Priest Soroka contacted the Russian Embassy in Bratislava. In January 2003 the Russian Embassy First Secretary Oleg Semenov visited Osadné. Secretary Semenov promised financial aid for the reparation of the crypt. The crypt’s reparation was initiated in 2003. Lenik, a cooperation, was able to repair virtually the entire interior of the crypt by the end of 2003. The work performed encompassed reparation of the floor, walls, ceiling, and the introduction of electrical wiring. Work continued into 2004 with the building a shelter which served as an entrance to the crypt, and improved the drainage around the temple. In 2005, a walkway leading to the crypt was completed and the reparation project was finished.

A cross was raised in front of the crypt, which was blessed by Metropolitan Nikolaj on the 5th of September 2004. Metropolitan Nikolaj was the spiritual leader of the Orthodox Church in the Czech lands and Slovakia. The dedication was attended by representatives of the Russian embassy. On July 17th, 2005, the crypt was dedicated by John, Bishop of Michalovce. Distinguished guests and representatives of the Office of the President, Ministry of Culture, the Parliament of the Slovak Republic, the Slovak Republic army, embassies, and more than 500 believers attended the event. Minister Lavrov expressed his gratitude to the priest and believers of the Parish of Orthodox church in Osadné for the care and work in the reconstruction of the crypt. Additionally, a letter from the Slovak President Ivan Gašparovič was read offering his greetings and best wishes. President Gašparovič met with the priest Soroka at a later date.

Today Osadné is a small village populated mostly by senior citizens.  Since the reconstruction and dedication of the cross, many tourists began to visit it and it was also promoted in many media. Thanks to it, the film director of documentary films Marko Škop learned about the village and made a film about it called "Osadné". Its main characters are the local mayor and an Orthodox clergyman. The documentary was a great success . As result of the documentary, Osadné has became quite famous not only to people in Slovakia but also to people throughout the world. Tourism to Osadné has increased every year since the documentary was released. Visitors to Osadné not only visit our unique crypt, but enjoy our beautiful mountains around the village. Osadné has sponsored an International Festival for Slovaks and Polish, Nativity concerts, The Bethlehem play etc. The village continues to plan for the future and prays to the Lord for His help.

More information from the history of the crypt and the Orthodox Church in Osadné, about the  battles and fallen soldiers can be found at www.krypta.sk

Andy Warhol Museum
22,89 km
City/Municipality: Medzilaborce
* There is noticed the direct distance (as the crow flies) in km
* Click on the map marker for more details

Andy Warhol Museum
22,89 km
City/Municipality: Medzilaborce
* There is noticed the direct distance (as the crow flies) in km
* Click on the map marker for more details

Memorial to Tokajík tragedy - Museum of SNP
32,78 km
City/Municipality: Tokajík
* There is noticed the direct distance (as the crow flies) in km
* Click on the map marker for more details

Open Air Museum in Humenne
28,49 km
City/Municipality: Humenné
* There is noticed the direct distance (as the crow flies) in km
* Click on the map marker for more details

Mansion in Humenne - Vihorlat Museum
28,70 km
City/Municipality: Humenné
* There is noticed the direct distance (as the crow flies) in km
* Click on the map marker for more details

Mansion in Humenne - Vihorlat Museum
28,70 km
City/Municipality: Humenné
* There is noticed the direct distance (as the crow flies) in km
* Click on the map marker for more details

In the years 2006 - 2009, a documentary film by film director Marek Škop called Osadné was shot in the village. It discusses the efforts of the ... 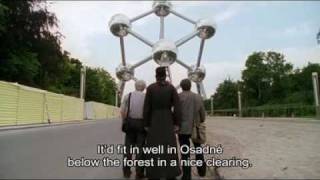 Panorama Crypt of soldiers from World War I. in Osadné

Blue Church - St. Elisabeth Church
The Blue Church - Roman Catholic church in Bratislava was built between 1909 and 1913. It is located in the capital of Slovakia - Bratislava on Bezrucova Street. (Bezručova ulica). It is characterized by the blue color of the plaster and roof. It is a one-nave sacral building with built out cylindrical tower. The church is decorated with architectural elements of secession (fashion and ...
Wooden baroque bell-house in Hronsek
It located near Wooden Articular Church in Hronsek, in the district of Banská Bystrica, Banská Bystrica region. In 2008 was the  wooden Baroque bell-house together with Hronsek church enrolled to the World Cultural Heritage List of UNESCO.
Evangelical lyceum - lyceum library
The first reports of the existence of Kežmarok town schools are from years 1383-1392. There is the assumption that the first type of this school -  parish - there was already a century earlier. There studied and worked in the 16th - 20th century prominent Slovak, German, Hungarian, Serbian and Czech personalities. Evangelical lyceum is historic Late Baroque building. It was built in the ...
Kežmarok - New Evangelical Church
The New Evangelical Church in Kežmarok was built in the eclectic style between 1872 and 1894. It was built by the domestic builder Viktor Lazar according to the project by the Viennese architect Theophil von Hansen. It belongs among the national cultural monuments of Slovakia.