Banská Štiavnica is one of the most beautiful and historically most interesting towns in Slovakia. Štiavnica, once called “Silver town”, is like a textbook of history, architecture and landscaping. Everyone knows that it attracts artists, romantics and generally all people able to perceive its magical atmosphere. But no one can say certainly what the core of its magic is. Maybe it is because the town’s location in the centre of a long-extinct volcano, maybe because just below the surface it has kilometres of mining tunnels drilled through the ground like Emmenthal and maybe it is the result of its picturesque architecture.

Metal mining was practiced here already by Celts and Slavs. In the 12th century, Hungarian king Gejza II called German miners here. The town privileges were bestowed on Štiavnica by king Belo IV – likely at the same time as he did in Stoličný Belehrad and Trnava, in 1244 at the latest. The town used to be one of the most important in the Medieval Europe. It used to be Europe’s Eldorado, the riches gold and silver deposit.

Its treasures hidden underground payed for the palaces built in Vienna and Budapest and the town itself used to be the third biggest one in the Kingdom of Hungary.  For several centuries, the city was a treasury of Austro-Hungarian Empire. Rich miners built palaces here; it hosted the “ministry of mining” of central Hungary. It was the third largest city of Hungarian Empire and a place of origin of the first university institute of technology in Europe. It was a proud city, known throughout the Old Continent.

In Štiavnica you could find alchemy, Freemasons and top science with education, too. It was here that gunpowder was used for blasting rocks for the first time in human history. The first technical university in the world – the famous Mining Academy was established at this place and many technical inventions spread into the world right from here. One of the most sophisticated and the largest hydro-power systems was also developed here, in Banská Štiavnica: artificial water reservoirs called tajchs. Moreover, it is the place where a famous Slovak author Sládkovič fell in love with his Muse Marína.

At present the town attracts visitors by its splendid and untouched architecture, churches and palaces of rich burgesses in the town centre and humble mining houses scattered on the steep hillsides. Narrow romantic streets and hundreds of stairs interconnect the “storeys” of the town. Štiavnica is photogenic, as if time has not affected it: you will find here no traffic lights or billboards. Traditions are kept here.

In the historic core of the city - city's historical town reserve there are many art-historical objects. The city centre was, under the supervision of conservationists, restored to its original state. The local artificial water reservoirs (called “Tajchs”) and the remains of mining activity became part of the land, which in turn contributed to its unique character. As time went by, tourists started to come, and the glorious history begins to shine through again. An important milestone was the year 1993, when the historic city centre was, along with the technological monuments of the region, enlisted in the UNESCO’s World Heritage list. 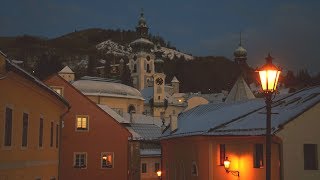 Jasovská Cave (Jasovská jaskyňa)
It is located on the eastern edge of the Jasovská Plateau, in the Medzev Upland and in the Jasov village and in the national nature reserve Jasovské dubiny. The entrance is at elevation of 257 m. It is formed in Middle Triassic grey Gutenstein dolomites and pale Steinalm limestones and dolomites by the preious ponor flow of Bodva river in five developmental levels. The lowest parts of the cave ...
Bardejov
Bardejov is a town in the Prešov region. It is located in North-Eastern Slovakia, in the tourist region of Šariš. There are a few places in Slovakia that can boast of such richness of historical sights and movable items of historical value like Bardejov. Among other things, this is also due to the fact that this territory used to be an important transit area. Since Ancient Times, influences ...
Drienovská Cave (Drienovská jaskyňa)
It is situated on the southern border of the Jasovská Plateau (Jasovská planina), northerly from the Drienovec village in Slovak Karst (Slovenská kras) -  mountain range of Slovak Ore Mountains (Slovenské rudohorie). It is a spring river cave formed in three developmental levels. The underground stream flows through the lower parts of the cave. Cave length is 1,348 m. Remarkable is the ...
Dobšinská Ice Cave (Dobšinská ľadová jaskyňa)
Dobšinská ice cave belongs among the most important ice caves in the world. Since 2000 it is inscribed on the world heritage list. As compared with known high-mountain ice caves Eisriesenwelt and Dachstein-Rieseneishöhle in Austrian Alps or with the Romanian Scărişoara Cave in Bihor Mts., which has the glaciated part at elevations of 1,100 to 1,120 m n. m., the monumental glaciation of the ...