Čachtice Castle became famous thanks to Elisabeth Báthory who was born in 1560. The Báthory family owned large properties in Hungary and especially in Transylvania. According to legend, their predecessor Vid killed a dragon in the swamp of Eczed and that is why the family had three dragon teeth in their Coat of Arms. In the 14th century the House of Báthory divided into two branches: Báthory of Somlyó and Báthory of Eczed.  Elisabeth’s parents were George IV of the Báthory of Eczed branch and Anna Báthory of the Somlyó branch. The marriage with George was her third. For the majority of Báthory family members of both branches there were eccentrically disposed characters. More out of them had tendencies to self-conceit, pride, bullying, lust and also to sexual perversion. The Somlyó branch died out in 1635 and the Eczed branch perished by the sword in 1605 when Stephan Báthory, brother of  Elisabeth, died without male heirs.

When she was 15, Elisabeth Báthory became wife of Francis Nádasdy. He was famous for being a great army leader and fighter. In fights Francis Nádasdy showed great courage and braveness. He was considerably cruel towards Turks and ordered mass executions of war prisoners. His army unit was renowned for charging into battle with the decapitated heads of the Turks. He was much respected in the Ottoman army and was known there under the nick name “Black Beg”. He participated in the main battle of Budin and Pest against the Ottoman Empire in the ranks of the main General of the army behind the Danube. His army recaptured Pest and turned away the vanguard of the Ottomans. He also fought in the Five Year War against the Turks.

Elisabeth Báthory had 5 children with Francis: Ursula and Andrew died as new-born babies. Anna, Catherine and Paul remained. Elisabeth Báthory became known for torturing young girls.  This could be caused by inbreeding – the fact that her parents belonged to the same family even of different branches. It is possible that her brain degenerated and this led to the aggressive features of her character. In this torture and maltreatment of people Elisabeth Báthory was helped by her servants: John Ujváryi (called Ficko), Catherine Benecka, Dorothea Sentesz and Ilona Jó. They are alleged to have maltreated and murdered girls constantly between the years 1585 – 1610.  She tortured girls with burning candles, with hot iron, poked them with needles and poured water on them when it was freezing. But they were not always killed.

Witnesses gave evidence that they saw girls so burned that they were not able to get into a carriage. Elisabeth Báthory also celebrated Christmas by torturing others and envoys of Palatine Thurzo caught her when she tortured girls right after Christmas and before the wedding of her daughter when two German maids died. She buried the dead bodies in various places – in the cemetery, in fields, in granaries. In many cases bodies were buried so carelessly that the decomposing bodies were dug out by dogs which then carried them on the courtyard.
Ruin in reconstruction

Gýmeš Castle
48,69 km
City/Municipality: Jelenec
* There is noticed the direct distance (as the crow flies) in km
* Click on the map marker for more details

Park of miniatures Podolie
5,45 km
City/Municipality: Podolie
* There is noticed the direct distance (as the crow flies) in km
* Click on the map marker for more details

Červený Kameň Castle - Red Stone Castle
48,53 km
City/Municipality: Častá
* There is noticed the direct distance (as the crow flies) in km
* Click on the map marker for more details

Očkov mound (Očkovská mohyla)
7,25 km
City/Municipality: Očkov
* There is noticed the direct distance (as the crow flies) in km
* Click on the map marker for more details

Budmerice mansion
48,38 km
City/Municipality: Budmerice
* There is noticed the direct distance (as the crow flies) in km
* Click on the map marker for more details

Park of miniatures Podolie
5,45 km
City/Municipality: Podolie
* There is noticed the direct distance (as the crow flies) in km
* Click on the map marker for more details

Očkov mound (Očkovská mohyla)
7,25 km
City/Municipality: Očkov
* There is noticed the direct distance (as the crow flies) in km
* Click on the map marker for more details

Music Museum - Mansion Dolná Krupá
31,09 km
City/Municipality: Dolná Krupá
* There is noticed the direct distance (as the crow flies) in km
* Click on the map marker for more details

Čachtice Castle is located in the Trenčín Region. It became famous thanks to Elisabeth Báthory. Nearby is also Beckov Castle (12.45 km as the crow ... 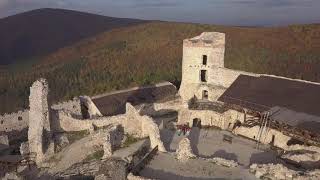 Trenčín Castle
The Trenčín Castle is a castle above the town of  Trenčín in western Slovakia. Trencin Castle is quite extensive refurbished castle, towering on a steep limestone cliff directly above the town of Trenčín. It is a not only landmark of town, but also of the whole of  Middle Váh region (Stredné Považie). It is National Cultural Monument. History of the castle goes back to the age of the Roman ...
Music Museum - Mansion Dolná Krupá
The history of Mansion Dolná Krupá dates back to the 16th century and is associated with the Brunsvik family. The mansion was built by Anton Brunsvik in the middle of the 18th century on the site of an older building. At the end of the 18th century and the beginning of the 19th century, the mansion was rebuilt, and other objects were added, too. Part of the mansion is also a large English park ...
Šomoška Castle
Šomoška Castle is located in southern Slovakia, near the village of Šiatorská Bukovinka in Region Banská Bystrica (Banskobystrický kraj), in Lučenec district. The castle was built in the 13th century, it was built probably by Illés from the Kacsics family. During the Middle Ages, the castle was owned by several families, e.g. Széchényi, Forgách, Lossonczy. In the Middle Ages it also served ...
Nitra Castle
Nitra Castle is a national monument and landmark of the city of Nitra. At present time, visitors can see the restored castle complex, they have the opportunity to explore the Castle grounds with St. Emeram Cathedral, Diocese Museum, Casemates and Cathedral Tower. Cathedral of St. Emmeram's is a part of the castle complex and it is cathedral temple of Diocese of Nitra. The Nitra Diocese is ...